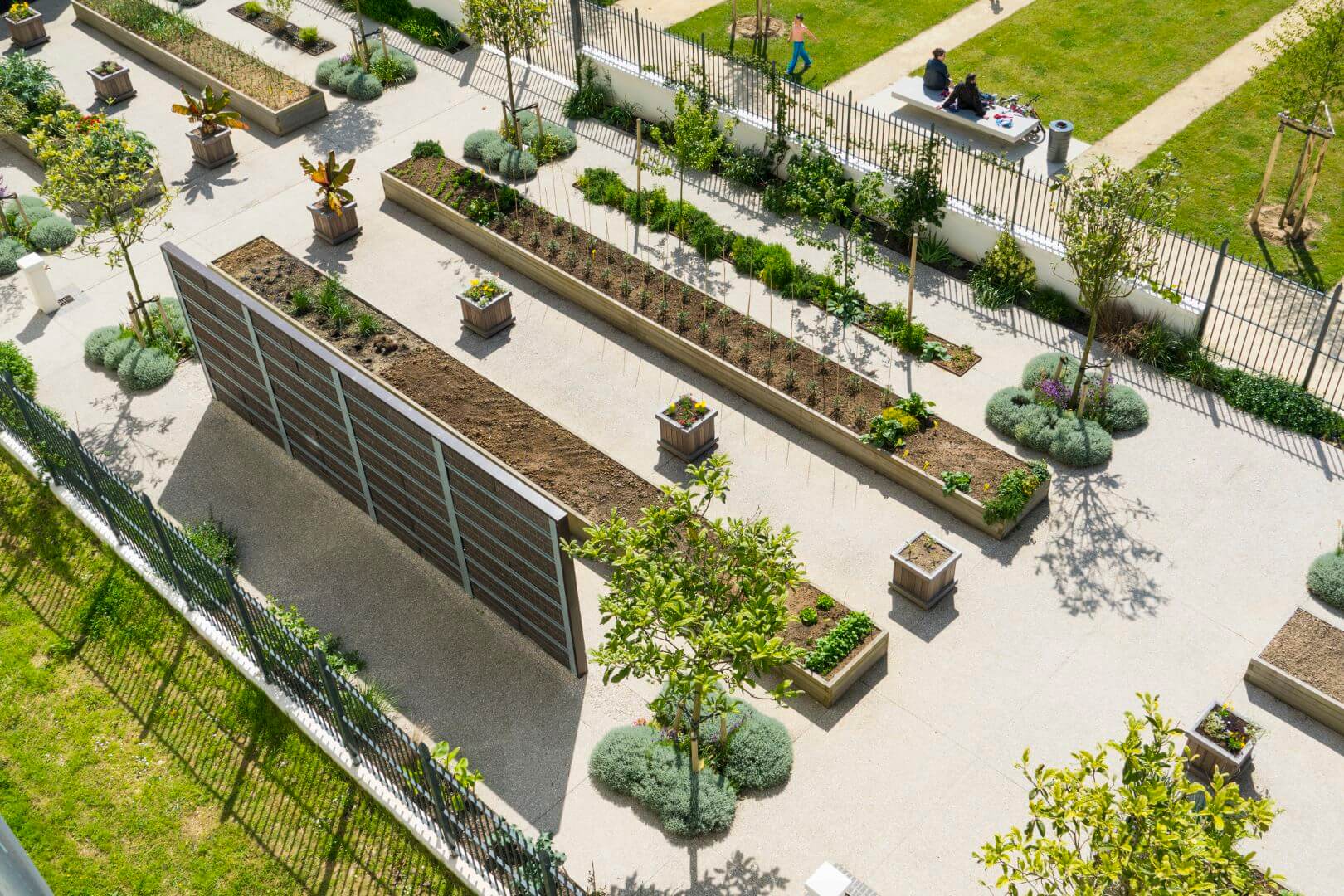 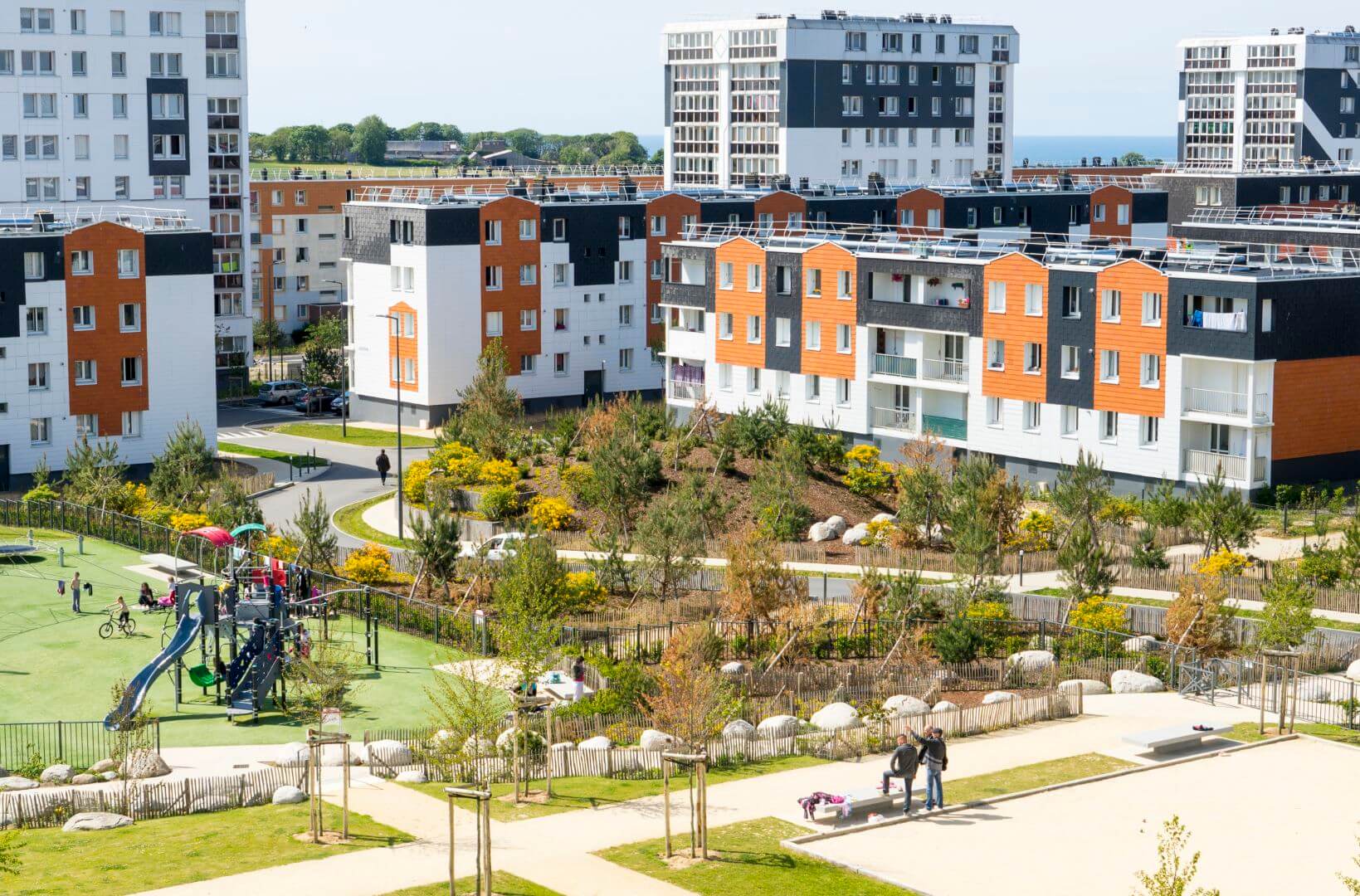 Fécamp is a charming and authentic 19 000 inhabitants town in Normandy, famous for its attractive white cliffs and known as “Newfoundland fishermen’s capital city. Located on the southern outskirts of the town, and developed in the 60s, its Ramponneau district had become a difficult neighbourhood. It recently benefited from an ambitious urban renewal program. With nearly 4,300 inhabitants, it is the link between the lower town, a school group and the surrounding countryside. The urban project consisted in de-densifying this district, bringing a landscaped aesthetic participating in improving the living environment, fighting against vacant housing and opening up this district. Centred on an urban park, the landscaping project offers multiple sub-spaces themes intended for education, walking and other recreational activities. Each space, both private and public, is vegetated with perennials and robust plants, and adapted to the local climate, between sea, city and countryside. Each street has a species tree of its own. The Ramponneau project has brought together many green city principles: placing green space at the heart of the project to allow residents to benefit from the many benefits of plants and landscaping. It is exemplary because it has given life and dignity back to a poor part of the city.

There are multiple sub-spaces themes intended for education, walking and other recreational activities such as water games, a kiosk for the reception of children, a gardener’s kiosk and an educational garde. A meditation garden has been created for the church.
Consultation with the users was central in the development of this project; the inhabitants were even invited to visit other sites developed in France to understand that a district like theirs could quite be transformed by the green spaces.
The neighbourhood has lost its bad reputation; all generations cross outside the buildings, enjoying the green spaces.
The arrangements are respected; a “green brigade” mediates, educates and contributes to the maintenance of green spaces.

The landscaping project made it possible to beautify the district by renewing the entire landscape palette, by cutting down old poplars and replanting multiple local species, so as to structure the neighbourhood and bring more light into the homes. The urban blocks have also been inside vegetated. To this extent, even if this was not the major initial objective, the program had a favourable impact on the return of a certain biodiversity to the neighbourhood.

The improvement of the living environment brought a feeling of pride of belonging according to the city and landlords; and made it possible to eliminate vacant housing.

Some evapotranspirant species with a strong crown refresh the atmosphere in summer, reducing urban heat island effect. Water games also add a nice fresh feeling. All species and varieties have been carefully selected to keep maintenance as low as possible: compact habits, and low watering needs. All plants have been provided by local and regional quality nurseries, both to allow the best local climate suitability and reduce the transportation carbon footprint.

The program also made it possible to change the way neighbours look at the Ramponneau. The inhabitants consider these spaces as their own collective garden.

Trees and shrubs have been essential to this project. Not less than 242 trees, 625 shrubs and 10 272 perennials and cover grounds have been planted. 160 scots pines, yellow flowering Rhododendron luteum and Ulex europaeus ‘Plenus’ give the place structure and character. Easy care heathers protect the ground and add a beautiful natural touch of colour: Calluna vulgaris Marlies’ and ‘Sandy’, Erica darleyensis ‘Kramer’s Rote’, ‘Silberschmelze’ and ‘Spring Surprise’.
Streets offer diverse vegetal atmospheres, nicely combining trees and ground covers in order to keep maintenance as low as possible : Pyrus calleryana ‘Chanticleer’ and Symphoricarpos x chenaultii ‘Hancock’ or Carpinus betulus and Bergenia cordifolia or else Tilia cordata ‘Erecta’ and Geranium macrorrhizum ‘Spessart’. All species and varieties have been carefully selected for their compact habit and drought resistance, helping reduce maintenance as much as possible.
All plants have been provided by local and regional quality nurseries, both to allow the best local climate suitability and reduce the transportation carbon footprint.

The urban renewal of the Ramponneau district redefines uses and gives full place to the pedestrian.
The 1.5 ha recreational park has both a central role and a central place the renewed district. Entrances to the neighbourhood open onto a composition landscape that enhances them. The main streets are recalibrated and new streets with restricted sizes are created. A new grid of the road network facilitates connections. The urban park offers recreational spaces and peaceful, creative and educational. A vegetable garden and flowered closed, a playground and relaxation areas are blend into the new landscape, part of which is dictated by the urban frame.
Around public buildings, the landscaped space creates an orderly and much landscaped set. Marketplace, garden place open to the street, fun garden, terraces and games children animate his heart.

One of the objectives of this ambitious program was to give pedestrians more place to live and move in a safe and easy-going environment. Most of the streets have been redesigned for ampler sidewalks, more than 2 meters wide.
The park has been specially designed to make it easily accessible for people with reduced mobility.

Consulting residents probably was one of the key of this successful urban and green renewal program. Thanks to constant exchanges between the city, the control work, the inhabitants, this development made it possible to strengthen social ties, promote social diversity, cultural and generational for lasting change the image and life of this neighbourhood.