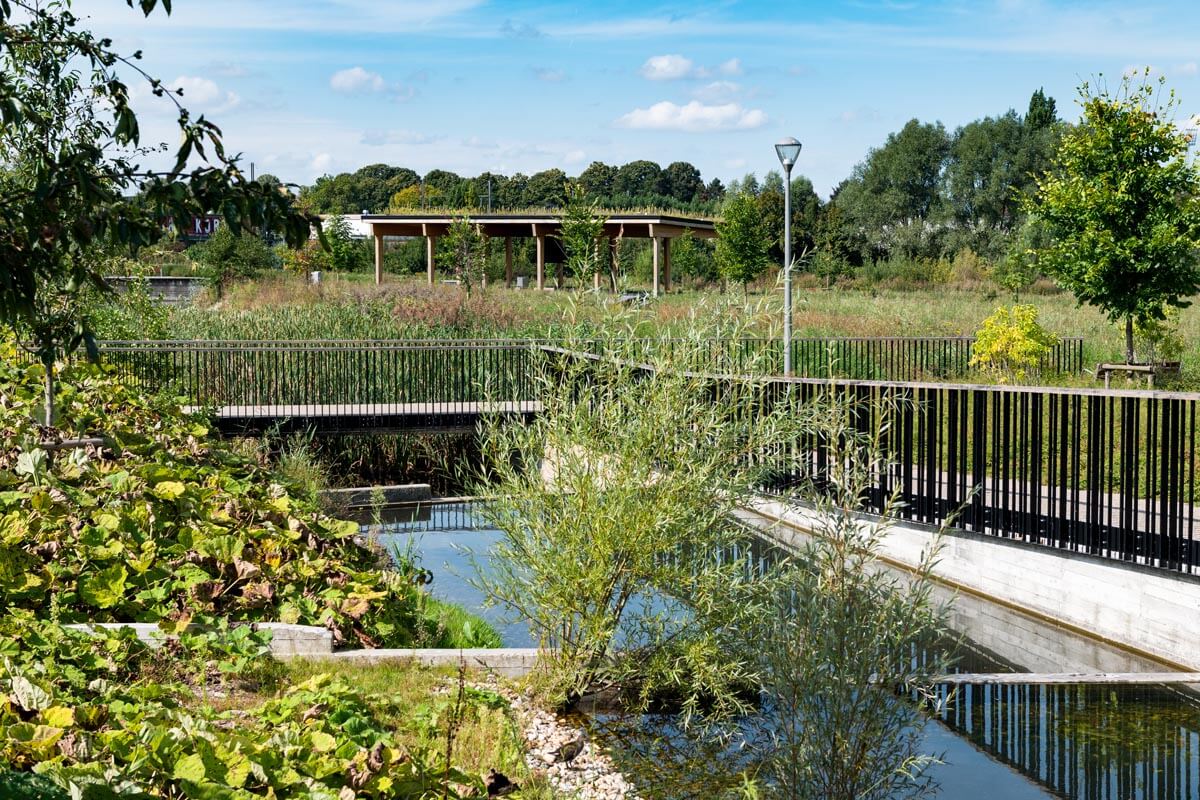 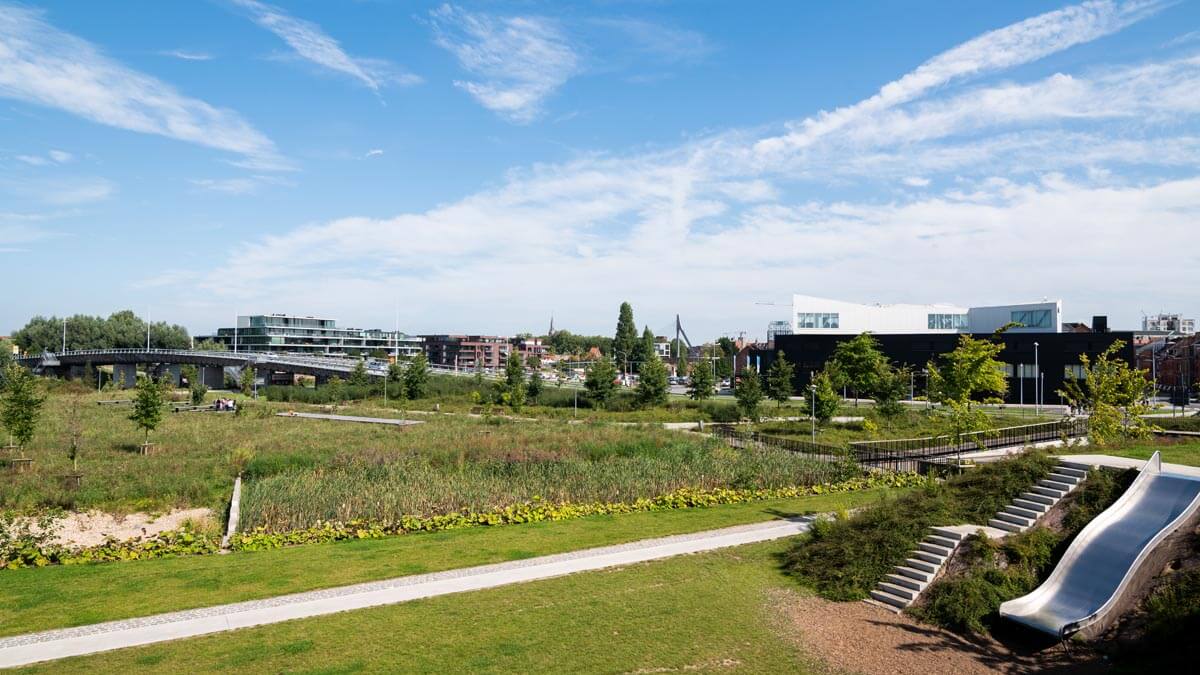 Submission by: Municipality of Kortrijk

The city of Kortrijk is located in the western part of Belgium. The domain, called Kortrijk Weide (measuring 6.5 ha), used to be  a marshalling/railway yard. Part (2.9 ha) of the location has recently been transformed into an ecological park which  serves multiple purposes: there are educational institutions, a public swimming pool, ,an events square, work spaces for start-ups and an event hall.

The idea of the design (Tractebel – landscape architect Denis Dujardin)  is to preserve and integrate the existing elements of vegetation, texture and buildings , while adding new architectural elements so as to improve the attractiveness of the terrain.

This project was elected as best new neighbourhood park of Flanders by the VVOG (Association for public green spaces). The mix of ecology and the integrated approach of the diverse functions, both for buildings and open spaces, has contributed to this nomination. The courage to ban housing at such location also contributed greatly to the nomination.

The entire location is conceived according to the vision of cohesion and unity for joint use.

The functions are maximally intertwined and integrated. There is, amongst others, one communal water reservoir which  is used across all functions and buildings. The same goes for the solar panels, park zones, parking, restaurants etc.

The park zone plays a primary role for various user groups. Residents, children, students, and visitors can find a place that suits their needs.  This is supported by seating elements, ,a firepit, a buffer basin to be used as an experience and play zone and integrated elements for skating, sport and play. These are visually almost indistinguishable elements which ameliorate the area and create cohesion between the various users. E.g. the paths are adapted for jogging, benches are designed so they can be used by skaters.

In this part of the city, nature is given all chances to expand. Several endemic trees were planted and complemented by a varied undergrowth and herb layer. The goal is to create a contrast between wet and dry, creating a higher biodiversity.

The meadows consist of a herb layer with diverse cutting regimes and various species  rather than plain grass lawns. A  mixture was chosen so as to help nature to take its course at this location. Rattle (a hemiparasite) was for instance sowed to lower the grass production and daisies were used to bring  colour and social acceptance.

The railway garden is converted into a multifunctional outdoor space in which e.g. graffiti walls and outdoor climbing walls are integrated. During construction we made sure to safeguard and create a habitat for the common wall lizard, by retaining  south facing walls with large stones, tunnels etc.

Designing and cutting into space in city centres always has an economic factor. Distinct choices and policies have to be made and these have to be pursued in the further development of the area.

The objective of the transformation is to achieve welfare and wellbeing gains for the city and its inhabitants. In this  part of the city, nature was chosen above housing. Half of the total surface of 6,5 ha has been transformed into nature whereas it was previously paved. The remaining space consists of community facilities: a college, incubators, a public swimming pool and an event square.

Private housing was consciously banned at this top location along the river Lys and parking space was strongly diminished. This will probably result in a big (economical) gain for the city.

Water is the central theme throughout the project. All  methods for water collection are integrated within the project. Reuse from the communal water reservoir is maximalised for all buildings.

Water plays a multifunctional role at this site: habitat, water management by water infiltration and buffering, as a colling element and as an element of experience for visitors, in particular children. Moreover, externals can also access this water supply, for example the city can use the water for watering its flower arrangements.

A major asset is the open water throughout the park. A new water structure was obtained by further developing the existing streams and ponds. The different parts of the water structure and their functions are: a reedland which has a purifying function, a mainly ecological part which is equipped for fauna and flora, a wade and splash zone for kids and lastly an open pond where occasional swimming is allowed.

We have created a peaceful place in the city and this on different levels. For hikers it’s a place of quiet and rest. Furthermore it is a meeting place for humans (and nature). Both the resting platforms and the fire pit encourage social meetings. Kids can find entertainment at the water playground and  youth can -amongst others- use the skating ground or go for a run.

For the students, which are numerous due to the close proximity of multiple campuses, the park functions as a meeting and entertainment space. Everything is possible, from strolling on the wooden decking to relaxing and indulging in the meadows. The park is located along the river Lys and creates the link between green and blue elements to form a network into the city.


Selection, origin and quality of the products and materials

The construction of a city park on an old marshalling/railway station demanded a special approach right from the start. Concrete pavement and strips of cobblestone, buildings, brooks and water are omnipresent at the site. From the start we have made an inventory and looked into possibilities for conservation and reuse. That is also a part of an ecological approach. Not only the park should be ecological, but also its creation. To do that we applied the principle of maximally preserving what can be preserved from the designing phase until construction. This method limits the ecological footprint. Earthmoving was kept to a minimum. Existing brooks were integrated. Elements were  re-used/recovered when possible, such as concrete plains and strips of cobblestone. Furthermore tree groups were also inventoried from the beginning and were preserved.

The quantity of new materials was reduced due to these measures. When new materials were necessary, they were ecologically tested. All of the used wood has the FSC label and all stones used for the common wall lizards are derived from Belgium. All plants in the park zone are indigenous. The illumination are LED and are dimmed at night, this minimises light pollution but still safeguards the use of the park.

The unbuilt space at the site used to be in poor condition. The ambition was not to erase all the ‘traces of the past’ and reshape it to a generic, everyday park. To the contrary, all existing vegetation and textures (e.g. cement plains, brooks, (outgrown) plants) were preserved and further landscape-architectonic/architectural elements were added. This increases the readability of the park and it provokes an interesting tension between the existing nature and human interventions. The goal is to become a new pole of attraction, where ecology is intertwined with low-impact recreation. Existing and more atypical (due to the common wall lizard) biodiversity is protected and preserved in their habitat.

The structure of the water garden, which also serves as a water buffer, an infiltration zone and a splash & play zone, is an example of elements with their specific character that are integrated in the park. Moreover the use and functions are multifunctional. Furthermore there are a nut garden, a reed border along the Lys, diverse resting spots with e.g. a barbecue area. Overall, this creates a varied program of possibilities and opportunities.

Since the objective was a low impact city park, all utility values were integrated in a subtle manner. To discover these you have to observe the usage. The retaining walls of the buffer basins can be seen as stepping stones in the water. The benches have metal edges and as such are a part of the skate park. Preformed hollows in the concrete elements create subtle (water) play elements. The paths have a jogging lane. The slide next to the stairs creates a fun experience. The sand mountain, which was carelessly left there before, now has become a play paradise. City nature as base of a city park is not common, but if all elements are subtly intertwined it can work. Kortrijk Weide is the proof.


The impact on the environment

The approach was a holistic approach right from the start.

For all new functions and buildings (youth centre, education, incubator, swimming pool, events square) we chose total integration. Car parking spots were reduced, bicycle parking spots are common. Water recuperation and solar panels are common as well. A heat network is fitted, but is not yet in operation.

Additionally, the question on how to construct ecologically with minimal impact arose. This is why we banned any tillage off-site. All tillage occurred at the locations. This diminishes the transport and associated CO2 emissions. Where possible, other means of transportations were used. Contaminated soil was transported by cargo ship instead of lorries. This has an ecological advantage but unfortunately not an economical advantage.

The impact on the environment was taken into account during the whole process. From the designing phase and onwards, ecology and the preservation of the environment were preconditions for this project.


Innovative value off the project

It is rare for a site of this extent in a city centre to be addressed in this day and age. It shows courage to choose to concentrate functions and ban residential building.

Green and nature are two keywords, this by itself is already an innovative value. All communal or recurring functions of all new buildings were examined. What can we make communal, can we bundle functions? The relaxation area, bike racks, catering, but also rainwater management, solar panels, use of space and a communal heat network are all available for communal use.

The park was designed as a nature park, for low-impact use. It is and stays a city park, but the details create experiences, interactions between nature, those present and also between the different user groups.