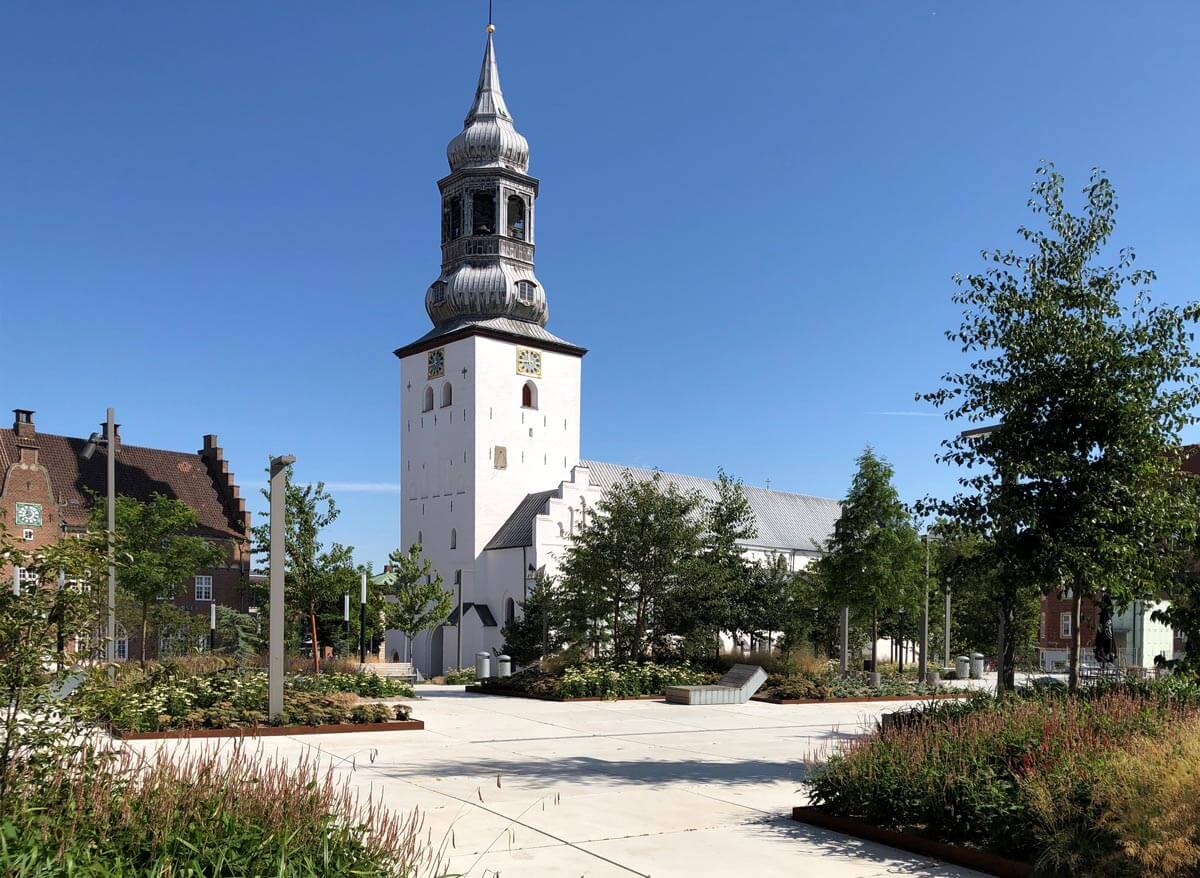 Budolfi Plads is centrally located in Aalborg, a city in the northwest of Denmark. It has the cathedral as its nearest neighbour. Earlier, the area was rundown and housed a car park and supermarket, whereas today it is a welcoming green urban environment – popular with citizens and visitors alike.

The square is an element in the city’s network of urban spaces. Boasting underground parking, the square itself is flanked by new buildings with shops, restaurants and cafés on the ground floor and apartments above. The urban space encourages visitors to spend time hanging out in the green surroundings.

This transformation is a good example of the municipal strategy of promoting a green and active city centre that is developed together with citizens and other key stakeholders. In addition to its many inherent qualities, the project contributes to the narrative of Aalborg as a sustainable, green city. A good place to live and work – and an exciting place to visit.

With the transformation of the area around Budolfi Plads, a new, green identity has been created in the heart of Aalborg offering free and accessible places to meet for people of all ages, thus boosting social cohesion. Different types of urban furniture invite groups to hang out and engage in conversation.

The project has seen the extensive involvement of local citizens, neighbours and key stakeholders. There were two rounds of debate. First  to gather opinions and ideas regarding the transformation. This was followed up in relation to remarks concerning the overall solution – based on input from citizens –  drawn up as part of the basis for the transformation. Furthermore, several dialogue meetings were held with selected stakeholders, including the parochial church council. Such involvement appears to have engendered a sense of ownership and pride, with photos of the area often being posted on social media.

Vegetation is varied, lush and green appealing to the senses and ensuring different experiences as the seasons change. Spring and autumn colours, bark, branch structures, flowers and berries  are all highlighted by the light.

The species planted have been chosen to create biodiversity. The robust and eventful vegetation creates variety in terms of spatiality and a distinctive green volume in the centre of this dense part of the city. Large trees were planted in order to create effective vegetation within a short space of time, whilst a mix of deciduous and coniferous trees helps to maintain an evergreen expression during the winter months. October cherry trees provide an unexpected twist as they flower in the cold and grey months, meaning they are often photographed and posted on social media. The project has therefore also helped to provoke dialogue in the public domain.

The urban renewal project has also had significance for how the city centre is viewed as a whole. Aalborg is now seen as a major city with integrated blue and green elements. It is a city that is ambitious in terms of prioritising a green agenda that exploits coveted square metres in the optimum manner and which gives dilapidated urban spaces plagued by heavy traffic back to the citizens in a new green form. Experience shows that green cities are seen as healthy and attractive. A green city has thus a significant economic asset: it attracts new citizens, businesses and visitors, generally resulting in a boost to local trade.

The extensive biomass which the project brings to the area via its green roofs, plant beds and trees has an effect on the area’s microclimate, providing both shelter and shade in the summer months. At the same time, the vegetation converts CO2, absorbs particles from polluted air and thereby helping to ensure better air quality in the city, as well as reducing resonance between the buildings. The vegetation also helps to reduce run off of rainwater and increases evaporation. It also helps to reduce the urban heat island effect. Any excess rainwater that runs out onto the paving is collected and diverted into an underground tank so that the water can be used to irrigate the area during dry periods.

Bringing verdant nature into the centre of Aalborg, Budolfi Plads has been transformed from a somewhat dismal car park into an attractive oasis for the benefit of local citizens and visitors (and insects) alike. The square buzzes with urban life and acts as a destination for those wishing to spend time at one of the square’s cafés and restaurants, those shopping in the supermarket, at the new wine merchant or sourdough baker, those relaxing on the benches and enjoying the atmosphere in the green surroundings, as well as those who are just using the square as an attractive shortcut.

The streets and spaces around Budolfi Plads have also been transformed. Car parks have been closed and replaced by more vegetation, with spaces redesigned for pedestrians. There are many different areas in which to hang out, whilst a former car park east of the cathedral is now a children’s playground.

The area surrounding Budolfi Plads is characterised by red apartment buildings to the south and east, and historic buildings to the north and west. The majority of the new buildings are located to the south and west and are built with considerable variation in the heights of the buildings, as well as offset facades. The facades themselves consist of attractive red brick that ensures harmony with the apartment blocks to the south and east. These buildings naturally blend in, with the cathedral remaining the most prominent structure. A smaller, unique building flanks the square to the east. The space opens up towards the historic buildings to the north, yet also interacts with the area’s own buildings and open ground floors. The urban space can be described based on two general characteristics: a solid area that provides full accessibility across the square and the distinctive vegetation in the form of green slopes that fill the terrain to the surrounding city and large beds of plants on the square.

Large white paving slabs are a reference to the cathedral’s whitewashed walls and are easy on the eye in the square, emanating calm and dignity. Selected slabs are marked by patterns that are interpretations of microorganism deposits in chalk. At the same time, the white cement from Aalborg Portland is a powerful local product.

Plant beds are edged with corten steel. Lush, diverse and robust vegetation consisting of trees, various grasses, bulbous plants and herbaceous perennials characterises the beds and slopes. The steps that lead up from surrounding streets are finished in white cement. In the southeast corner, the steps are combined with a ramp in corten steel that provides mandatory disabled access, whilst towards Budolfi Plads Gade an elevator can be used between the basement car park, the street and the square. The northern slope has winding paths with white gravel present in the binding agent.

The project was carried out in a process in which the building site was fenced in, but had easily accessible observation points. Moreover, regular information was provided to the neighbours on what was happening and when. Out of consideration for the area’s neighbours, archaeology and historic buildings, foundations were established with focus on minimal noise and vibrations. Measures were also put in place to minimise dust, dirt and noise, including the transport of material away from the site before crushing, extensive use of dust barriers, etc.

Budolfi Plads is a ‘game changer’ – a traditional urban space in the city centre, but where focus has been on a new and very green agenda. It is also significant that the urban space was designed before the buildings, i.e. the buildings had to fit in with the urban space – and not the other way round, which is often the case. As a case and destination, the project has thus attracted a lot of interest – both from ordinary citizens and tourists, as well as professionals such as urban planners and other municipal authorities in Denmark and the rest of Scandinavia.