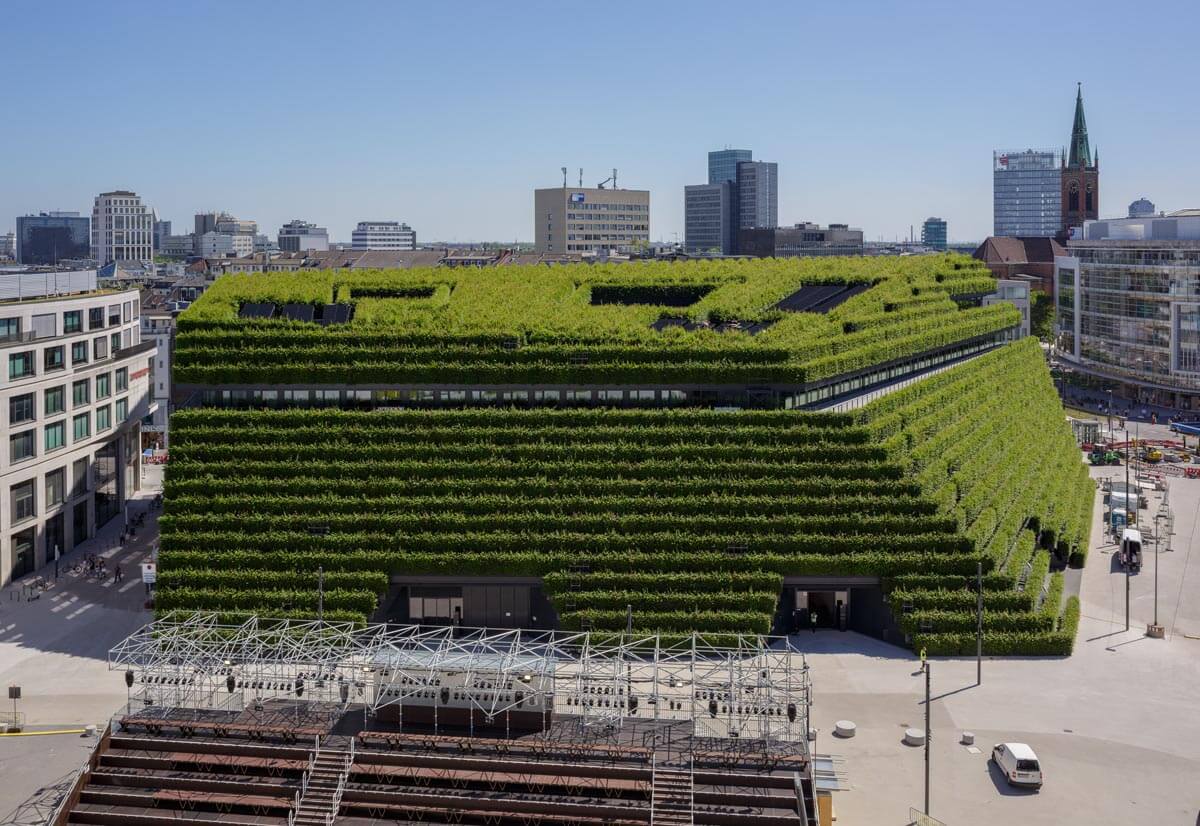 The Kö-Bogen II complex is situated in the centre of Düsseldorf in the west of Germany. The complex was intended not only to create an outstanding building with city-forming architecture, but also to implement a comprehensive, sustainable concept for climate protection at the same time.

Where, until a few years ago, a four-lane main traffic artery ran through the middle of Düsseldorf, an urban renewal project developed the urban redesign of the Gustaf-Gründgens-Platz. Here, the “largest green facade in Europe” was created as part of the Kö-Bogen II project. This architectural highlight was made possible as part of the concept for the Kö-Bogen II business and office ensemble. Today, tree islands, seating areas, a lawn of approx. 1,300 m², gastronomy opposite the newly constructed offices and commercial building invite visitors to linger.

Green areas on and around the building complex are a central element of the overall concept. Particularly striking: a green sloping facade and a roof area with a hornbeam hedge comprising around 30,000 hornbeams. This corresponds to an impressive 8 kilometres in length.

The greenery prevents the facade from heating up to 70 degrees when the sun is strong, and this heat will not return to the surrounding air. Almost half of the solar energy is converted into water vapor which cools the surrounding air. The leaves of the hornbeam improves the microclimate of the city, absorbs CO2 and produces oxygen. It also binds dust, dampens noise, promotes biodiversity and provides general human well-being.

Even in the event of heavy precipitation, rainwater retention initially holds the water on the roof. At Kö-Bogen II, the gap in the natural water cycle created by land sealing is closed. In this way, an overload of the municipal sewage system is prevented in a natural way.


Impact on the environment and the innovation value

The Kö-Bogen II building complex comprises 24,000 m² of stores and 5,500 m² of office space, which ensures a high visitor frequency. The quality of stay should therefore be as pleasant as possible for both employees and visitors. The green building envelope, which has been completed in  2020 clearly succeeds in this.

Particular attention was paid to the selection of plants suitable for this project. Based on careful research by a phytotechnologist, hornbeams were selected. These had already been grown and conditioned for 3 years in the special planters in a special substrate adapted to the needs of hornbeams.

The leafy area of the facade and the roof greening with a size of more than 4 soccer fields and with 30,000 hornbeams prove to be an immense energy converter. Evaporation through the hornbeam foliage can mitigate the effects of climate change, urban heat islands, by cooling the surrounding air.

In addition, the sloped roof area on the so-called food court was covered with grass. This area can be accessed from the pedestrian zone and serves as a green recreational area for people in the  city centre. Here too, special products that were suitable for use on the roof as a substructure for the lawn were selected. An irrigation system also ensures that the lawn remains permanently green.

All in all, an excellent example of how the effects of climate change can be mitigated and the quality of life in cities improved.