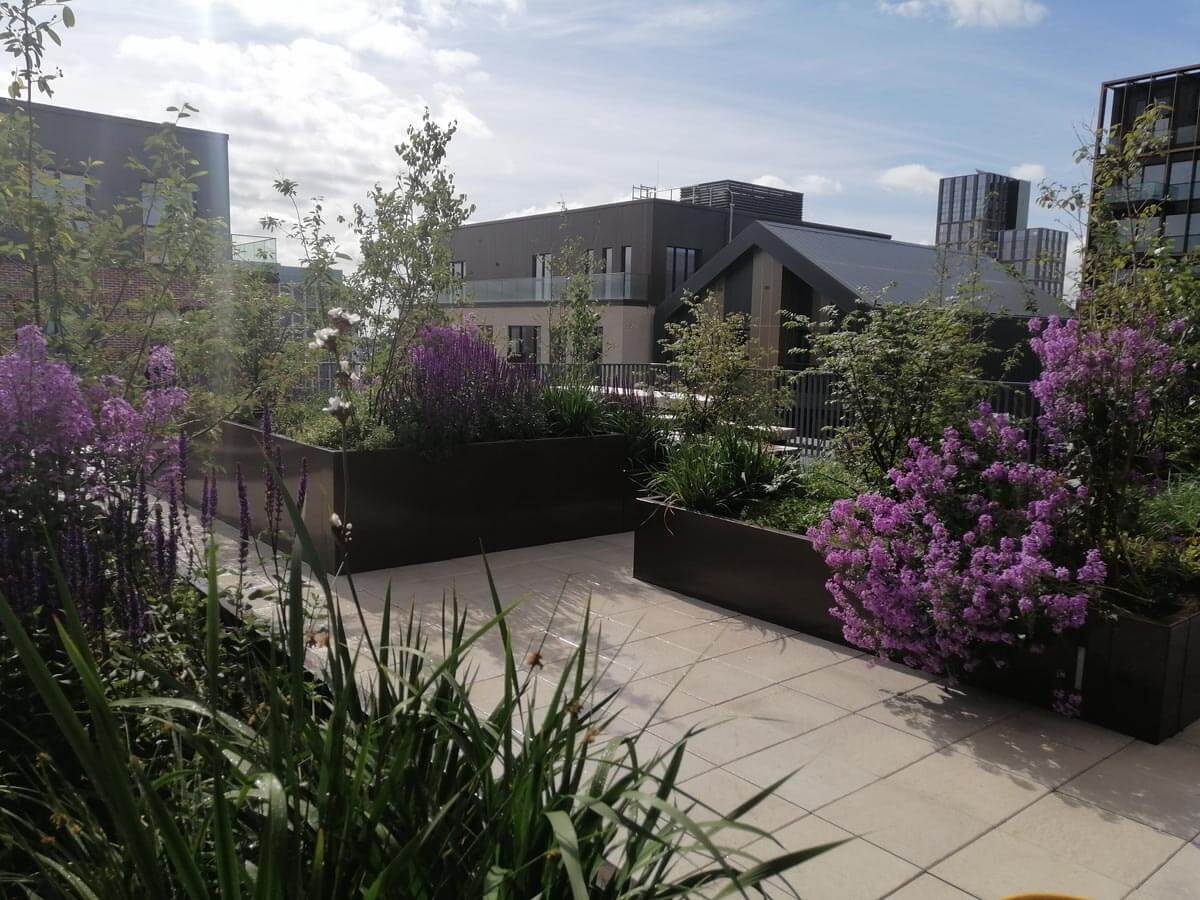 Dublin Landings is a new, mixed use urban development at North Wall Quay, Dublin. The scheme involved input from multiple Irish design practices but was installed and maintained by Peter O’Brien and Sons Landscaping LTD. The landscape includes extensive and unusual planting, mature trees, roof gardens, raised planters, courtyards and plaza areas. The scheme has been entered as it marks a new benchmark in urban landscape design, investment, complexity, and construction. In an Irish context, it marks a transition from low value, utility planting to the creation of high-quality liveable green spaces. It reflects a maturing of attitudes, expectations and knowledge in relation to the role played by plant material in underpinning the social, economic and environmental fabric of urban life.

The scheme positively contributes to social cohesion through the provision of a diversity of liveable and inviting green spaces. Seating, play equipment and ease of access to homes, facilities and workplaces create a legible and accessible urban environment; this affords opportunity for a planned and spontaneous social interaction. The scale of surrounding buildings is mediated by a high proportion of planting areas, which produces a human scale intimacy making the landscape feel accessible and almost gardenesque. Despite its size, the scheme has evoked a genuine sense of ownership and engagement from residents and developers. It is their landscape.

The scheme positively impacts biodiversity through the array of green spaces which include plaza, courtyard, roof top, balcony and boulevards areas. Unlike traditional urban planting, Dublin Landings includes a wide palette of resilient tree, shrub, perennial and bulb species. The palette provides habitats and food sources while also creating microclimates. Although it is a new scheme, it has already begun to support numerous insect and bird species.

Give the relative youth of the scheme, it is difficult to quantify the exact economic benefits conferred by the scheme. This noted, the scheme commands higher rental values and occupancy rates than neighbouring sites. What is also of importance is the level of investment green space development being made by the scheme developers. The level of investment has not been seen in Ireland before and speaks to the vital importance of quality urban green space.

The scheme contributes to mitigating the negative impacts of climate change through the scale and diversity of plant types, soil and rhizosphere. Collectively, these elements afford a cooling and shade effect during summer months offsetting the heat island effect. They provide for carbon capture and storage, improve air quality by reducing particulate pollution and mediate flood potential by slowing run off. From a socio-economic prospective the scheme has generated dialogue and set a new standard which similar schemes will have to match or surpass.

The project is an excellent example of how investment in green infrastructure can positively influence the perception and wellbeing of users. The creation of a mature tree canopy created an inviting, human scale environment, while the variety of ground level planting provided for interaction and engagement. The range, quality and accessibility of spaces afford opportunity for restorative experiences and social interactions. They have also fostered a sense of ownership, belonging and cohesion among residents as evidenced in frequent positive interactions between residents and the landscape curating team. Users can be seen reading, playing, retreating, meeting, meditating, and exercising in comfort and security. In a conservative, self-conscious country, this is a considerable step forward and speaks to the positive contribution the scheme has made.


The selection, origin and quality of used products and materials greenery and constructing materials

The landscape scheme consists of a huge range of resilient hard and soft materials appropriate for an urban context. Primary hard landscape materials include granite and concrete paving, polished concrete seating, play equipment, steel planters and steel and timber bench seating. Granite paving was sourced from a variety of foreign suppliers, while concrete paving and seating were manufactured in Ireland. Planters, benches, and other street furniture were designed and manufactured in Ireland. Soft landscape elements include soil, trees, and planting. Soil was sourced and prepared locally. Plant materials were hand selected from a range of national and international suppliers. One of the important aspects of the scheme is the plant palette. While too large to list here in entirety, a number of species are noted to provide insight; Pinus, Quercus, Amelanchier, Tillia, Gleditsia, Crataegus, Magnoloa, Cercidiphyllum, Euonymus, Hydrangea, Betula, Smilacina, Rogersia, Molinia, Gallium, Melianthus, Frageria, Acanthus, Perowskia, Aruncus, Pennisetum,  Thymus,  Libertia, Kniphofia, Soleriola, Dryopteris, Astrantia and Persicaria.

The landscape design is intended to maximise opportunities for urban greening, to offset and accent architecture and provide quality, useable space. Breaking from the traditional grid layout, the scheme employs a deliberately disruptive arrangement of planting and paving areas. This ensures shared spaces have their own, unique character which is not subservient to the surrounding architecture. The angular asymmetric layout also maximises opportunity for spontaneous social interaction and positively influences the pace of users. The form of the surrounding buildings was not within our scope, but they are considered brave, innovative and creative for material and quality of construction.


The impact on the environment (holistic, circular approach)

Unlike the majority of surrounding developments, which feature minimal green space and related infrastructure, the Dublin Landings development put people and green space to the fore. Not only does it set a new benchmark for urban landscape quality, its accessibility, permeability and location in the centre of Dublin have provided a point of dialogue and tool for raising awareness. The scheme is viewed holistically as the heart of Ireland’s commercial shift toward city greening and has made a hugely significant contribution to improving the physical environment. While it was impossible to source many of the materials required to ensure longevity, resilience and circularity of the development, everything that could be was.


The innovation value of the project

The innovation value of the project is expressed in its novel composition, use and experimentation with a diverse planting palette (in an Irish context) and the willingness to break the mould of traditional, banal Irish landscaping.