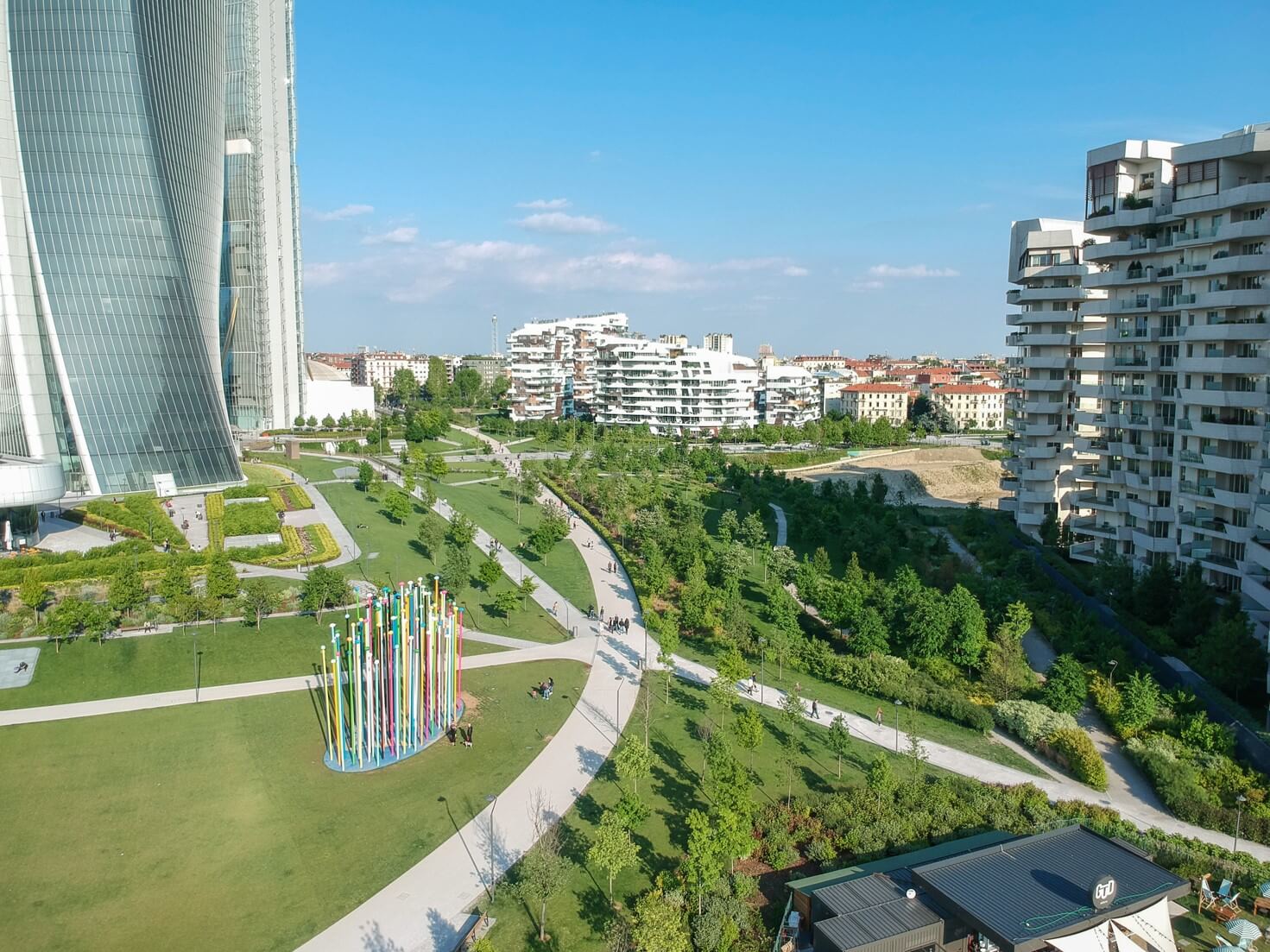 CityLife is one of the largest urban regeneration projects in Europe, covering a total area of 366,000 square metres. The transformation plan provides for an articulated and balanced mix of public and private functions, including residential, offices, shopping, services, green areas and public spaces. Following the inauguration of the new Rho-Pero exhibition centre, the old exhibition area in the centre of the city was to be redeveloped. Between 2007 and 2008 a major demolition and reclamation project was carried out on the twenty exhibition halls. An accurate protection and recovery project allowed the perfect integration of the residential areas, zero-impact kindergartens, urban gardens, one of the largest pedestrian areas in Milan and the 170,000 square metre park (the heart of the project).


Impact of the project on social cohesion, biodiversity, economic factors, climate and wellbeing of visitors/users

The CityLife park is one of the greatest examples of urban regeneration in which fundamental elements of city life come together perfectly. CityLife has set itself three main objectives: 1) to create the largest pedestrian area in Milan and one of the largest in Europe, limiting parking and car circulation to underground levels, 2) to reduce the total volume by half compared to the buildings present before the project and 3) to create the third largest park in the city of Milan.

The park recreates the microcosm of Milan and its territory with a succession of environments and situations recalling the peculiarities of Lombardy in which two contrasting aspects of the region’s physical character converge: the mountains and the plains. From a functional point of view, the project aims to maximise the usability of a public space that has no precedent, providing Milan with a park with a modern ecological concept. The wide variety of environments is intended to encourage social interaction, walking and contemplation on the part of those who visit the park.


The selection, origin and quality of used products and materials (greenery and constructing materials)

The softscape design has the intent to create a variety of green materials. The vegetation design highlights the different areas of the park and preserves the uniqueness for each of them.

Herbs and perennials paint the park all along the four seasons. For the construction of the CityLife green areas, species and varieties were used which are as reminiscent as possible of the composition of the flora of northern Lombardy. The material is mainly Italian and local, since the essences used are produced in the upper Lombardy floricultural district. To answer to the needs of the project, some of the green areas are on roof.

For the hardscape the design has the intent of using local materials as the Milanese traditional Beola stone in its different variations, the white granite, the lipica. The variety of laying schemes confers identity to the different areas and enriches the space. Asfalto natura for the main paths is the choice of a material with the performances of an asphalt without asphaltenes.

The choice of furnishings reflects the artisan tradition of Milan in the area and is based on a strong awareness of the high product quality and a continuous search for innovation, durability and longevity.

The design uses the land to create a warm, comfortable environment where people can have different views as well as perspectives. The topography creates different rooms, slopes where people can lay on. The park embraces the heart of the Three Towers. Morphologies create an interesting relation with the architecture, the Three Towers seem to lay on the sloping lawn creating an unusual scenario in Milan. The park runs around towers but leaves them the space to show themselves. The wooden area is located far from the built core, the landscape is shaped to announce the architectonic gesture of each tower. Bended, twisted and straight tower.

People can walk around the 3 symbols of the park and appreciate them.

A roof garden covers 40.000sqm of the park. The project has been developed to give an unitary impression of the park and maximize the perception of the green lung.


The impact on the environment (holistic, circular approach)

The project objective is to favour the resiliency of intervention as regards to climate change, through:

The innovation value of the project

The function of the park is to integrate in a continuous way the different facets of the citylife area: residences, kindergartens, shopping area and sports area.

Citylife park is the larger/largest car-free park in Milan. To do that, the metro line and the parking have been integrated in the basement.The park runs over the underground street that surrounds the basement. A daring roof garden made just with natural materials (big bags of perlite as water reservoirs) with differences of levels till 4 metres has been created to let the park run in a light slope till the basement of each tower.

The park hosts lots of functions, kindergarten, orchards, paddle and tennis playground, basket playground, kiosks. Furthermore, a Contemporary Sculpture open-air museum takes place in the park. After an international competition among young artists, 8 of them have been chosen to complete the list of 12 famous artists as Judith Hopf and Pascale Marthine Tayou, Maurizio Nannucci, Adelita Husni-Bey. More than 20 art-works site specific have taken place in the park.